“No one can remain insensitive to the inequalities that persist in the world… I would like to make an appeal to those in possession of greater resources, to public authorities and to all people of good will who are working for social justice: never tire of working for a more just world, marked by greater solidarity” –Pope Francis

Solidarity “is not a feeling of vague compassion or shallow distress at the misfortunes of so many people, both near and far. On the contrary, it is a firm and persevering determination to commit oneself to the common good; that is to say to the good of all and of each individual, because we are all really responsible for all” –Saint John Paul II

JOIN US FOR “LEND YOUR LEG” SOLIDARITY DAY

TO RECOGNIZE THE INTERNATIONAL DAY OF MINE AWARENESS and to symbolically “stand” with those that suffer. 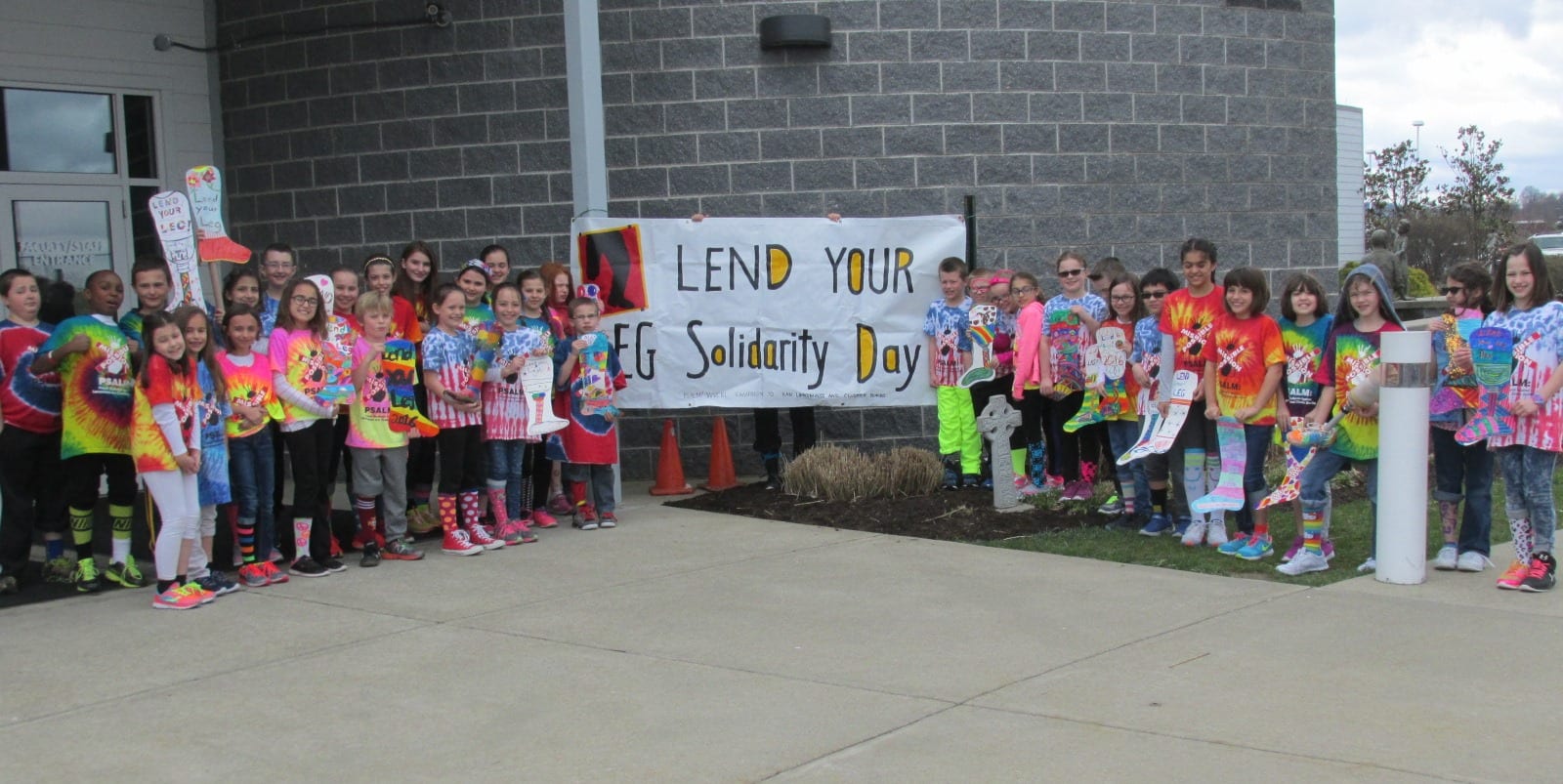 PSALM students are hosting a “LEND YOUR LEG” Solidarity day at SFCC on FRIDAY, APRIL 12TH.  PSALM joins the international community to  “Lend Your Leg for a Mine Free World”, and show solidarity with all survivors of landmines and other explosive remnants of war.

St. Francis de Sales School community members and families are invited to join us and roll up one pant leg, wear some cool socks and symbolically “stand” in solidarity with the victims and survivors of landmines and persons with disabilities.

St. Francis School community members and families are invited to join us, DRESS DOWN IN PANTS, roll up one pant leg, wear some cool socks and symbolically “stand” in solidarity with the victims and survivors of landmines and persons with disabilities.

“Lend Your Leg”  encourages people worldwide by a simple but symbolic gesture of rolling up a pant leg to raise awareness about the damage landmines and cluster munitions still cause and showing solidarity with all survivors of landmines and other explosive remnants of war.

What is “Lend Your Leg”? Watch the official LEND YOUR LEG video here: http://www.youtube.com/watch?v=XGduCYrPlAo.

Long after wars are waged some weapons remain a lurking threat to civilians in the peacetime that follows. Landmines and cluster munitions are indiscriminate weapons that wait underground for years and sometimes decades maiming and killing children, farmers and everyday citizens who happen upon them. “LEND YOUR LEG” began when people were asked to roll-up their pant leg to draw attention to the landmine problem in Colombia and show solidarity with the victims.

“Lend Your Leg” turned into a country-wide then international phenomenon.

PSALM students are committed to educating the public about the the indiscriminate nature of anti-personnel landmines and cluster munitions leading to the destruction of innocent life, especially children. Students feel it is unacceptable that unarmed civilians become targets of these insidious and indiscriminate weapons long after wartime hostilities cease. PSALM students were outraged that children, the most vulnerable of society, were all too often the victims of these indiscriminate weapons, many left after conflicts long since over, coming upon them in the most innocent of activities like playing or going to school. These weapons instill fear in whole communities, deepening poverty and acting as a lethal barrier to development. Members of the treaties to ban landmines and cluster munitions must complete the task of ensuring that all victims of landmines, cluster munitions and other explosive remnants of war see their needs fulfilled and their rights respected and aims to promote an understanding of people with disability and encourage support for their dignity, rights and well-being.

THIS IS OPTIONAL..IF STUDENTS DO NOT WANT TO DO IT THEY CAN WEAR THEIR UNIFORM THAT DAY.

TO LEARN MORE ABOUT PSALM: