Mr. Hector Guerra is the director of the ICBL-CMC (INTERNATIONAL CAMPAIGN TO BAN LANDMINES AND CLUSTER MUNITION COALITION). He will be joining us here at St. Francis to meet with the PSALM students after school on Tuesday, May 7th for 3:00 to 4:30 pm. and speak with them directly about the importance of their work for a more peaceful world.

Mr. Hector Guerra is located in Geneva, Switzerland along with the ICBL and is a specialist on diplomatic processes related to disarmament, non-proliferation and arms regulation instruments, including the Arms Trade Treaty, the Anti-Personnel Mine Ban Convention, the Nuclear Non-Proliferation Treaty, and the humanitarian initiative for nuclear disarmament. Mr. Guerra works with ICAN, the International Campaign to Ban Nuclear Weapons, recipient of the 2017 Nobel Peace Prize. He is an associate professor on disarmament at the National University of Mexico, and part of the team of academic advisers to the International Committee of the Red Cross for Mexico, Central America and Cuba, on issues related to armed violence. Mr. Guerra has always been supportive of the efforts of PSALM students in the realm of international peace and justice. We are honored for him to visit us here at St. Francis. PSALM parents may join us!

Mr. Guerra is shown below, second from the right and standing next to Prince Mired of Jordan. 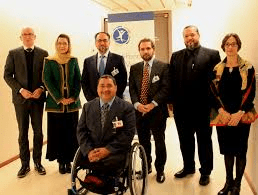