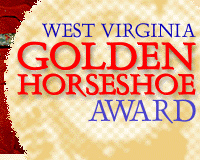 One of the highlights of the eighth-grade year is the opportunity for a student to become a Knight or Lady of the Golden Horseshoe. This prestigious program takes its name from the golden horseshoes given to the early explorers of West Virginia. In 1716 the Governor of the Virginia colony, Alexander Spotswood, saw the need for exploration of the land west of the Allegheny Mountains, most of which is now West Virginia. The governor organized a party of about 50 men, all of whom adopted the pledge, “Sic jurat transcendere monte,” which means “Thus he swears to cross the mountains.” Governor Spotswood presented each member of his party with a small golden horseshoe to commemorate the bravery of those who crossed the mountains into Western Virginia, beginning the Golden Horseshoe tradition.

Of the seven recipients in Monongalia County this year, St. Francis is proud to have three winners represented. Congratulations to August Owen, Dominick Costello, and Sawyer Rudy!!111